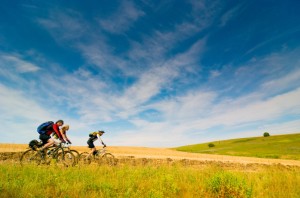 We can talk a lot about email analytics, but sometimes it’s more helpful to see a real-life example of a business using it and gaining valuable input from doing so.

Backroads is a ClickMail customer with a great example of what can be learned by paying attention to your email analytics. Backroads offers “active travel” bike trips at some of the most beautiful places in the world, photogenic places like Tuscany, Costa Rica and the Grand Canyon.

And, of course, Backroads uses email marketing to promote these trips to their subscriber base.

When they first started using Litmus for email analytics in 2012, they wanted to see how their emails were rendering on different devices. They were trying out responsive email design and wanted to how it looked but also–more importantly–the impact, if any.

So they ran the email analytics and got their first surprise: Theirs is an Apple crowd.

OK, it might not be that big of a surprise given the demographics of their customer base, but it was still useful information they could apply to their email marketing campaigns.

Then they looked at the analytics a year later to compare, not expecting much of a change in their user base. And as far as Apple users, that remained steady. Only one-fifth of their audience was using an Android device. But guess what? They saw a definite shift to opens on mobile devices rather than desktops. And they saw they were achieving a much higher engagement rate, from 60% in 2012 to 74% a year later.

Was that due to the use of responsive design? Were people more engaged on their mobile devices? Is this increase in engagement the result of those Apple users being on iPads? (Research shows people do much more shopping on iPad tablets than Android ones!) Or was it a combination of these three factors? Only time (and more email analytics) will tell. But knowing their audience has moved to mobile will definitely inform both the design and content of their email marketing moving forward.

Getting these kinds of analytics can sometimes be both tricky and pricey. But with Litmus, they were able to jump right in with ease but without expense.

I predict Backroads will be making some email segmentation decisions in the future, based on what they have learned so far. And I predict they are going to keep watching those analytics, to stay on top of (and compatible with!) the devices their customers are choosing.

What kind of email analytics and analysis are you using at your business? What kind of insights have you gained?