Email Is Not Dead—It’s Democratic 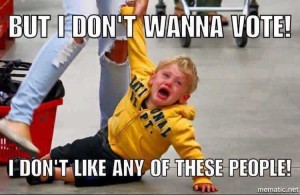 This insanely crazy presidential election is just about over, on November 8, and thank goodness. It has been a sad time in American politics, and for some, signals the demise of democracy, for reasons beyond the scope of this blog.

But it got me thinking: You know what’s really democratic? Email!

First off, no one died
First, let’s obliterate some myths here, that relate to both American democracy and to email: No one and nothing has died. For all of the Americans bemoaning the impending death of democracy, let me reassure you that it’s not dead, just perhaps a little bit sick. It can heal.

Ditto for email, although it shows no signs of ill health and is far from dead. Nevertheless, pundits have been declaring email dead for years—and continue to do so despite the fact that email is still alive and kicking (and in really good health, as far as I can tell!) Yet to this day you get posts like Email will be obsolete by 2020, or this post that says email is dead, using an analogy saying email is dead just like snail mail died when email came along. (Waaaaaiiit a minute. Aren’t we still using snail mail?!)

Why pundits pronounce email dead
Like Mark Twain’s famous quip about the rumors of his death being greatly exaggerated, poor email has not died, but it has been eulogized and buried many times over these past 10 years or so. In part that’s because of all the new ways of communicating we now have. We can choose from WhatsApp, Facebook messenger, Snapchat, FaceTime, Telegram and many others—and who knows what the near future will bring us? Each time a new one crops up, someone somewhere seems moved to write about the death of email.

The truth is, however, that email is not dead. In fact, email is so not dead, there’s a website called EmailIsNotDead.com with plenty of numbers and facts to prove it’s still a viable (and thriving) communications and marketing tool. There are 4.35 billion email accounts worldwide. Does that sound dead to you?

Why email is still supremely democratic
Admittedly we do have all of those other messaging options, but I argue that email is the only one that remains truly democratic, for reasons I’ve laid out below.

First off, each one of those other options restricts your liberties: They force everyone to be on their platform. On the other hand, email works across media. You read it, use it and interact with it from the platform, device and software you choose.

In addition, those other messaging apps limit your number of accounts. With email, you can have as many email accounts as you want.

Thirdly, the messaging apps only allow you to use the formatting they want, while emails can be formatted the way you want.

Finally, you don’t give away your soul to a hidden footprint and privacy policies, because the email account is yours as is the data (more or less).

At this point, you might be reading this and thinking that the current election feels much more like a messaging app, forcing you into a certain way of doing things in order to use it, and giving up some autonomy in the process. Perhaps the democratic nature of email is something we could model our politics after next time around, after we’ve survived this nasty election and moved on to one (we hope) much more civilized and, dare I say, democratic.