If You Do Nothing Else in the New Year, Resolve to Stop Annoying People 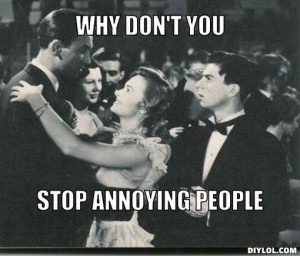 Do you know that famous line from “It’s a Wonderful Life” when George tells the young man, “Oh, why don’t you stop annoying people?!” It’s both funny and famous…and a pervasive complaint among those of us who are on the receiving end of emails from brands.

Why is it that companies will keep on emailing and emailing and emailing, just like the young man on the dance floor was going on and on and on about himself? Is it because these brands simply don’t realize they’re annoying? How can they not? Are they really incapable of tracking engagement to know when it’s time to finally shut up?

A real-life example of annoying
Consider my own inbox. Being Canadian Italian (Italian Canadian?), I used to fly from Toronto to Rome on a charter airline. That was three years ago. I haven’t flown on that airline since, yet they continue to email me even though I haven’t bought a plane ticket from them nor have I opened a single one of their emails in years…not a one! Yet these emails regularly appear in my inbox.

Sure, I can finally open one and unsubscribe to stop these emails from coming, but why should I have to? Why–after three long years of absolutely zero engagement–does this airline continue to think I want to hear from them?

Clearly they are clueless to the fact that I am unengaged, just like the boy in the movie was clueless as to Mary’s boredom. Or they simply don’t care.

Are you annoying people too?
As the New Year gets underway, stop to consider how annoying you might be. Maybe you don’t go on and on talking about yourself like in the movie , but then again, maybe you do the email equivalent of that, if you’re still sending emails to the unengaged.

What is your timeline and policy for the unengaged? What kind of list hygiene are you doing? If you can’t answer either of those questions, there’s a good chance you’re annoying somebody somewhere. Start with these best practices to stop annoying.

Keeping them engaged instead
Now, some marketers might think it’s time for a re-activation email when engagement ends, but with such a specialized business as flying from Toronto to Rome, you’d think these marketers would realize I am obviously not flying that route any longer since I don’t open their emails. (That said, if they’d sent me useful information such as travel tips or hotel reviews or things like that, I might actually have wanted to open their emails on occasion, and I might have stayed engaged.)

For other brands, a reactivation campaign could be just the ticket. However, I prefer to think in terms of prevention, with these seven tips for keeping subscribers engaged so a reactivation email is never needed.

But for the sake of annoyed people everywhere, if you don’t commit to any other resolutions in the coming year, at least resolve to clean up your email program and stop annoying people with unwanted emails. (And work hard to get new subscribers engaged from the start so people are less likely to be unengaged!)