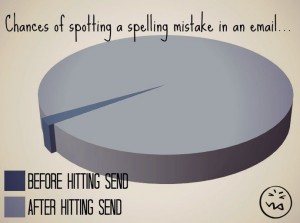 Sender’s remorse: that sick feeling you get in your stomach when you realize you’ve sent an email campaign that shouldn’t have gone out. How many email marketers have wished “unsend” was a feature ESPs offer? But it’s not, which means sender’s remorse will happen to just about every email marketer at some point in his or her career.

We recently had two such cases happen to clients of our email marketing agency. First, we had a client accidentally resend the exact same email to the exact same list. The client panicked, asking us to “remove any unopened emails.” Then another client sent an email with an image showing the wrong information for an event. That client also reached out to us for help, asking us to change the information on the image for any unopened emails.

In both instances, there’s a clear lack of understanding about how email works: You can’t unsend the sent, or change hardcoded words.

What can you do? Below I offer up some email marketing best practices for possible solutions to try and amend the situations (since they can’t be unsent), plus 4 tips for avoiding sender’s remorse in the future.

How do you fix a duplicate send?
In the first situation, there is no one solution to the problem. Unless it was a very large send being sent over time with a scheduling buffer, there’s no way to stop a send, let alone “remove” any unopened emails from people’s inboxes.

Instead, there are two ways to make amends to subscribers after a duplicate send. The first is to just let it slide, since the last thing a recipient of the first two emails wants is a third email explaining the mistake.

The second way is to send an apology email. This could be done in jest, explaining how you’re human and made a mistake, and offering something for their trouble, like a coupon or a discount. Although you’re sending yet another email to your list, offering something for free builds loyalty and goodwill. Plus, reminding your subscribers that you are fallible humans behind that email façade is also potentially beneficial, giving you a personality and maybe even some empathy that can grow your brand loyalty.

How do you change an incorrect image?
In the second situation of sender’s remorse, there was a fix without doing a mass resend. We simply changed out the image by uploading a corrected version of the same image with the same dimensions and name onto the image hosting server. When an individual opened the HTML, the new image would appear. The only people who would need a new version were Gmail users who had already opened the email prior to the image change, since Gmail had already cached the incorrect image and would continue to serve the same incorrect image. However, we could not change the text-only version that’s already been sent, so we suggested doing a resend with a correction to the small percentage of people who received the text-only emails and to any Gmail users who had already opened.

Tip #1: Schedule the email for a later time rather than send it immediately. Maybe schedule it for 30 minutes or even an hour later, so you have some time to think about it. Often we get so caught up in getting a campaign out the door that we’re not thinking clearly until afterwards…and that’s when we realize our mistakes and wish for an unsend feature!

Tip #2: Test. Test. Test. Testing should be part of every campaign you send, but particularly when you send. An easy way to avoid mistakes is to do a test send. Have a list of internal folks who get every email before it goes out to your real list. Send it to them first so they can fact check it, try all the links, and give it a thorough proofreading. (Just make sure you give them more than 5 minutes to do so!)

Tip #3: Try not to hurry. I know, sometimes campaigns simply have to get out the door. But if you can work from a production schedule with some “off” time built into it, like maybe a 24-hour period before an actual send, you’ll have time to review your email with fresh eyes…you know, the kind of eyes that can spot a mistake.

Tip #4: Either depend on an email marketing agency to be your second set of eyes, or, if you’re doing sends internally, find that one person in your organization who has a knack for spell checking and thinking things through. At ClickMail, we rely on our superstar employee Debbie for that task.

Sender’s remorse, like any remorse, sucks. But we can and should take steps to fix any problems we create, and to avoid mistakes in the future with these email marketing best practices. If, however, you find you’re still sending emails that shouldn’t have gone out, perhaps due to a lack of personnel, it might be time to talk to an email marketing agency about outsourcing some of your tasks.